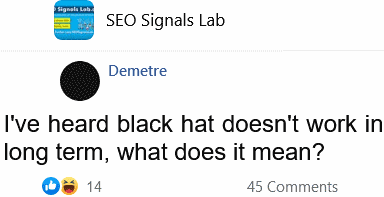 🔗🏹
Tyron
It means Google will eventually catch up to your black hat tactics and either algorithmically devalue your site or give it a manual penalty for going against their guidelines. For the effort (and money) it takes to do black hat SEO you might as well develop a solid strategy that won't put your business or client at risk.
🤔👍🏽13
Demetre ✍️ » Tyron
How do we know if Google cought up already and gave manual penalty? what is difference between algorithmic and manual penalty?
Raza » Demetre
An algorithmic penalty is a penalty that is automatically applied by a search engine when a website is not in compliance with its quality guidelines. A manual penalty is a penalty that is applied by a search engine when a website is manually reviewed and found to be in violation of its quality guidelines.
💟👍🏽2
Tyron » Demetre
for a manual penalty you will get a message from Google in Search Console.

Raza
There are many reasons why blackhat SEO is harmful. For one, it can result in a website being banned from search engines, which can greatly reduce traffic and visibility. Additionally, blackhat SEO techniques can result in low-quality or even spammy content, which can reflect poorly on a website and turn away potential visitors. Finally, using blackhat SEO can give a website an unfair advantage over its competitors, .
🤔👍🏽2
Phil
Black hat SEO is inherently more risky. Any day Google can and does close "loopholes" that people exploit. They've closed huge amounts of loopholes already.
It's not a sensible foundation for a stable long term business because, at any point, Google can take all your traffic again, and you have to start again from nothing, or close to nothing.
But some people are happy with, or positively enjoy, those risks.
Black hat SEO users have been around as long as Search Engine Optimization (SEO) has. They adapt, it seems.
It wouldn't work for my businesses as I build brands that I aim to hold onto and grow into successful companies. One is over 20 years old has had made $manymillions.
Petter
These days the major difference between "black hat" and "white hat" isn't as big as it used to be. Black hat has improved dramatically over the years. Private Blog Network (PBN) links still is a thing, but in order for them to work today – the content they are on has been changed to be more on topic and the websites too are more niched in. They have also been improved to give a better User Experience (UX) and appear as a good website while before you would see much more casino links inside an article about helping starving children on crappy UX websites with a domain that would indicate it was a plumbers homepage.
Not that this isn't still happening, but it is less frequent. So the truth is that some of these links will keep working for you for a long time, while others will stop working for you and pass little/no value.
But Google will eventually catch up on most of it, and unless some Google employee has choked on their coffee that morning, manual penalties for trying to game Google are rare. Mostly Google just devalues the links, in which case you will lose your rankings and will need to build more links to recoup lost ground.
However, and this is where black hat SEO really comes short, the ones pushing for this agenda rarely realise that the sites they work on becomes the most effective "spies" for Google to catch up on what is manipulative links or not if they only apply black hat tactics. Google has been able to push black hat SEO to this point where a lot of the ones thinking they still work black hat actually is more like 80% whitehat 20% blackhat.
💟👍🏽4
Ammon 🎓🎩
The definition of 'black hat' is stuff that the search engines don't (or wouldn't) like, and engineers would actively build systems to counter or penalize, etc.
Meanwhile 'white hat' was a term made up later for those who didn't do 'black hat' and wanted to boast about it (or more often in the reality of those that really shouted about 'white hat' at the time) – used the excuse that everyone else was cheating for why they didn't and couldn't rank in any competitive Search Engine Result Page (SERP)
Look again at how I defined 'black hat'. It is the stuff that search engines work on fixing and eliminating, or at least on neutering. It may take them a while, but they always get there, even if it takes them months or even years for some forms of spam. THAT is why it isn't for the long term.
Some black hat practitioners of course just work on rebuilding everything the search engines destroy just as quickly as the engines destroy it. They think this makes it sustainable, and it sort of is. But it means you reach a point where all your hours are going into rebuilding, and you are no longer gaining, only maintaining.
A 'white hat', or at least non-black-hat practice meanwhile is constantly building new, expanding, not having to constantly rebuild the old stuff. Even when what they build is less powerful per hour, they are not wasting hours on redoing the same tasks over and over every time the engines knock it all down. It's exactly like the old story of the tortoise and the hare – slow and steady wins the long distance race.

Saga » Ammon
dear how old r u now
Ammon 🎓🎩 » Saga
literally I'm still in my 50s, but metaphorically, in SEO terms I'm older than dirt (and probably dirtier).
Saga » Ammon
oh dear u should be SEO daddy
Ammon 🎓🎩 » Saga
you may know that in the earlyish years of SEO, right up until the early Noughties, we talked about 'generations' of SEO users. The first gens (of which I'm one) could swap notes, observations, and tips with each other, sharing experiences, but there was no earlier generation to learn from. Second gen SEO users were those who learned from a first gen, whether that was formal training in a job, some kind of mentorship, or simply that they avidly followed and learned from someone who'd been there before. Third gens learned from someone who wasn't a first gen themselves. That included folks like Rand Fishkin, Aaron Wall, etc who all got started in the early Noughties.
But we stopped counting there, because it started to get messy, as there were still people learning from the mentoring of first generation SEO users, making them second gen, but having less experience and time than a third gen…
Anyway, as a first gen who has been cited as a mentor by so, so many SEO users over the years, yeah, I'm an 'SEO daddy', also a granddaddy, great grandpa, and distant ancestor, as far as generations of SEO go. 😃
Saga » Ammon
how many SEO mommies u got pregnant over the years then?
Ammon 🎓🎩 » Saga
A gentleman never tells
Bassey » Ammon
Greetings, I need your help on best link building strategies
Ammon 🎓🎩 » Bassey
Pretty much everything you need to know is in my public posts here, throughout the group. I don't hold anything back, or give a lower quality of answer, so the only thing that is different in what I'd give in a private consultation is that it is more specific to the individual case, and that you save time compared to putting lots of my posts together.
If you have the time, putting it together yourself from my various posts saves you the cash. For those short on time but with plenty of cash, I do consulting.
Bassey » Ammon
thanks, no cash for now, will put it together myself, keep up the good works, best wishes

Alicia
It means the person who said that doesn't know much about Search Engine Optimization (SEO). It changes all the time. Black hat still works just fine but things that worked 10 years ago don't work today. For that matter, things that worked a year ago don't work as well today.
Lori
It's the equivalent of stealing for a living. It's fine until you get caught. Your clients will sue you out of business because you'll effectively have destroyed theirs. Part of the regular algorithm changes is to eliminate black hat players.
Marquez
that Google has gotten too smart for people implementing black hat techniques and it will continue to get smarter and more effective in caughting these back hatters so, makes a REALLY bad investment to try and outsmart a multi-billion dollar tech company like Google in the long run

Hicham
If the Blackhat Whitehat concepts and theories where not spread intentionally by Google, SEO users from all over the world would do anything to rank no matter what.
These theories are manufactured by Google to save themselfs a lot of time and money, and to mislead idiots to let them believe there is something called Blackhat.
Do you think Google checks every site manually? The largest People Also Ask (PAA) scrapers in the world are being manually checked and are growing harder than ever, even after multiple updates.

Ammon 🎓🎩 » Hicham
Nice theory. But having been there before these terms, and knowing WHERE they caught on, it just is not reality.
Blackhat vs Whitehat was mentioned informally a few times just in the generic sense that it is in pop-culture language anyway. But the first major citation of 'blackhat' was actually against a search engine, back before Google, when Altavista seemed to employ a human agency to check certain sites – webmasters kept reporting a user-agent from mibh.net hitting the same URLs shortly after Altavista's bot – mibh seemed an interesting and vague domain, and webmasters immediately noted it could be from pop culture – Men In Black Helicopters / Men In Black Hats as a reference to official spy agencies.
Webamsters and SEO users also used 'blackhat' as a slang term for just about anything else some competitor was doing that they felt was 'cheating' or nefarious, whether that was doorway pages (99% of Search Engine Optimization (SEO) was doorway pages back then), cloaking, or even malware etc.
There was no use of 'whitehat' as a label for anyone until a few years later when mostly one particular forum insisted on using it and trying to make it their point of differentiation. The forum was IHY, run by a guy called Doug Heil. Doug was a truly awful, utterly incompetent SEO of low skill, but that wasn't his fault, (according to him) as he was an "ethical white hat" SEO and everyone else was a cheating "black hat"…
No kidding.
Hicham » Ammon
Thanks for the historical background information about the origin of those words.
Well I guess Google just leveraged those terms to their advantage…
Without vague rules and possible penalty rumours the SEO/online space would be a wild west for Google to figure out

Acosta
if you follow all G-Terms Of Service (TOS) recommendations, your site won't rank. Things we consider white hat are black hat to uncle G . . . 🤣

QnA About Branding or Advertising

Keyword Research with Modifiers and KeyPhrases

Embed the link of this post
G. News 1G. News 2TwitterFacebookWhatsAppBufferLinkedInPin It